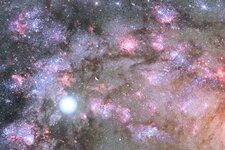 Does Universe Has Got a Soul ?
Creative Common by SA License

On 2016, many think that the Universe is going towards a loss of energy. But NASA has explored the opposite. Not only are there more and more big stars, but there are also more and more little stars, a lot more.

Our cells send information to other cells. The stars send light to the planets. The nerves send information to the head slower than stars. The emptiness of the universe, which owns material without weight, makes it possible to see the rest of the universe. Light has a speed, just as our nerves have got their own speed. There is a blood flow in the body. The universe produces more and more small stars, creating life. Also, the planets, where there is life, revolve around the stars. Finally, it is possible that planets go in the universe.

Time allows you to regulate a body. The soul regulates time. In other words, time evolves differently within different bodies. We can go faster than the light’s speed. Indeed, our Universe goes to another Universe faster than light. We can speed up the time for a human body, up to a certain limit. But the starting point is that the soul can blossom only at a certain speed. The soul’s speed is that allows its growth. It is therefore possible that the little souls see the time going faster. We see the children understanding quickly and the little adults thinking quickly. So, an adult soul has grown differently than child soul. Indeed, their soul is smaller and slows less.

The universe is a body that prevents chaos with light’s speed, but also with its expansion into the void, which could not contain material. It is possible that there is another force than gravity and antimatter, coming from the atoms, being used to grow. Gravity should depend on another universe embedded in ours.

The Earth’s biosphere is a body creating bacterial, vegetable, animal and noetic souls, that is, ours. The more life there is, the more vital activity is, according to Vernadsky. This vital activity requires a body that welcomes it. Our bodies, which aim to create societies, need the Earth’s body, which aims to create our life. The body Earth lives in the solar system, which is maintained within the Big Bang’s explosion. This does not prevent us from creating a Earth’s body. The Earth was created by the universe within the solar system. It needs the light’s speed to grow.

Also the light’s speed, overwhelmed by our moving universe, allows us to bring us to another entity, which, if it does not move, to go very quickly, if it moves, can decrease time. The universe makes it possible to reduce the chaos on a very large scale. Chaos is confused, infinite and instantaneous time. A body is governed by a soul, a body composed of its ingredients: The chemical elements.

Write about what you know about the Universe to understand the concept of life.

How does a Higher Idea Borns?
What Is a Soul ?
Life Is Movement
There Is Life in Atoms
Links between Soul and Body